I was tagged by the lovely Dahlia Burroughs to do the #allhallowswrite tag! Originally created by Sam Kasse.

It begins with two rules:

Rule 1: Give a brief description of your novel.

My novel is in a trilogy with the working title “Brittany & Charli: Book 1”. It follows the story of Brittany and Charlotte Matthews, who are identical twins in year 10. They live in affluent Sanford Beach where money and social ranking play a big role. Brittany is obsessed with popularity and getting a boyfriend. Charli writes poetry, is upset about her parents divorced and takes school seriously.

Rule 2: Don’t and se the same character in more than 3 answers.

1. It’s Halloween night! What is your protagonists dressed up as?

Charli: Daria from the Daria cartoons. 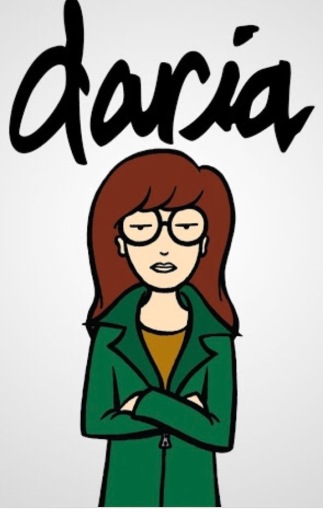 2. Who in your cast refuses to dress up and shows up at the Halloween party without a costume?

This would be Reece. Reece is one of Charli’s best friends. He has some social anxiety, and I can only see him being dragged to the party last minute by Kellie (Charli’s other best friend).

3. Which character wears the most outrageous costume, and what would it be?

I’ll say Will. I can’t decide what he’d wear, but it would be outlandish and probably inappropriate. Like a massive phallic symbol.

4. On Halloween, werewolves, vampires, and zombies are on the prowl. Which of your characters get caught in their clutches and which creature do they subsequently turn into?

This is Amelia. She’s Brittany’s best friend. Amelia is a follower and can get herself easily into trouble. I see her turning into a zombie and still follows everyone around.

5. Who wins the contest for best costume?

Chloe for sure. She has the most money and is the most popular. She’s most likely be covered in Swarovski crystals.

6. Who hands out toothbrushes to the trick or treaters?

Kellie. She would do it out of the kindness of her heart. Purely out of concern.

7. Which two characters decide to pair up and do an angel/devil costume together?

8. Someone is too scared to even attend the Halloween party. Who is it?

Charli. She’s always wary of who is gossiping or stabbing each other in the back. She doesn’t throw herself into situations. She’d be at the party purely to please her boyfriend Travis.

9. Who overdoses on Halloween candy and ends up sick?

Will or Madison. The two loud mouths who take any opportunity to stuff their faces.

10. Which character is most likely to place a curse/hex on someone and who would they curse?

I can’t wait for you to read the book so you can smirk like me about the rumour being Kellie. There is a storyline so similar to this! But I think this would be Kimberley. She is a vindictive bully, and would curse Brittany out of jealousy of time she spends with Chloe.

So that’s all my answers! Thanks again to Dahlia for tagging me. Please do this tag if you would like, and send me the link!